St Zosimas (April 4) was a monk at a certain Palestinian monastery on the outskirts of Caesarea. Having dwelt at the monastery since his childhood, he lived there in asceticism until he reached the age of fifty-three. Then he was disturbed by the thought that he had attained perfection, and needed no one to instruct him. “Is there a monk anywhere who can show me some form of asceticism that I have not attained? Is there anyone who has surpassed me in spiritual sobriety and deeds?”

Suddenly, an angel of the Lord appeared to him and said, “Zosimas, you have struggled valiantly, as far as this is in the power of man. However, there is no one who is righteous (Rom 3:10). So that you may know how many other ways lead to salvation, leave your native land, like Abraham from the house of his father (Gen 12:1), and go to the monastery by the Jordan.”

Abba Zosimas immediately left the monastery, and following the angel, he went to the Jordan monastery and settled in it.

Here he met Elders who were adept in contemplation, and also in their struggles. Never did anyone utter an idle word. Instead, they sang constantly, and prayed all night long. Abba Zosimas began to imitate the spiritual activity of the holy monks.

Thus much time passed, and the holy Forty Day Fast approached. There was a certain custom at the monastery, which was why God had led St Zosimas there. On the First Sunday of Great Lent the igumen served the Divine Liturgy, everyone received the All-Pure Body and Blood of Christ. Afterwards, they went to the trapeza for a small repast, and then assembled once more in church.

The monks prayed and made prostrations, asking forgiveness one of another. Then they made a prostration before the igumen and asked his blessing for the struggle that lay before them. During the Psalm “The Lord is my Light and my Savior, whom shall I fear? The Lord is defender of my life, of whom shall I be afraid?” (Ps 26/27:1), they opened the monastery gate and went off into the wilderness. 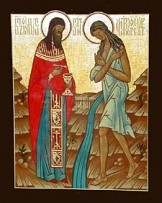 Small Compline and reading of the inspiring life story of 6 pm Compline and the Akathist to the Most Holy Theotokos

Saturday April 17 at 9am

Liturgy of  the Presanctified Gifts

What is the Liturgy of the Presanctified Gifts?    HERE is a brief explanation! An Introduction to the

What in the world is an Orthodox Christian? Lent - An Intimate Journey to God

Lesson from the sermon on the mount Success through failure in Lent Prayers of the Hours 9:40am

Use this time for private prayer

or volunteer your time to our parish How to remain a Christian

in the era of global digitalization

What is confession?
Why is it necessary?

Confession -
Not a novel but a battle Extensive and excellent guide to Orthodox

by the Orthodox Church of the Mother of God

Orthodox Christianity on the Web

by a member of our church